Easter is coming, and thoughts turn to ham. Actually, I think about ham a lot. We love ham, and tend to cook it with an eye towards a few meals: roasted ham, then leftover roasted ham, ham bits as part of an egg scramble, then ham soup. We have two primary ham-chefs, here at the farm, and recently I asked them for their favourite recipes.

Chef #1, and the most likely to make ham: Christiana! She uses her family recipe, and it’s simple, reliable, and so very good. She will often substitute jam for the fruit juice.

Chef #2 is Jeremy, who enjoys cooking big cuts of meat, and bringing us all to slow-roasted flavour-town for dinner. Last time he made ham, he used this recipe for inspiration.

Once we’ve feasted on ham, it’s time for the leftover-artists to take their turn!

Chef #3 is Erin, who doesn’t tend to cook a whole ham, but loves using leftovers. Last time she used ham, she used a ham bone to make broth, and then added the broth and remaining ham to cooked black beans, with onion, garlic, crushed tomatoes, salsa verde, peppers, and a mix of cumin, coriander, oregano and bay. This makes a thick smokey bean dish, inspired by flavours far to the south of Canada, that is lovely on rice bowls or in burritos.

Chef#4 is Tony, who makes a killer split pea and ham soup. This one is a staple here, and can be made with a ham hock, leftover ham bone, or whatever bits and pieces of smoked meat is hanging around needing to be used.

Caveat: at Cast Iron Farm, we generally use recipes as inspiration, not flavour prison. These are some good starting places, so take the recipe that calls to you, and adjust as you like.

Share what works, because I’d love to hear! (Due to excessive spam, I’ve disabled comments, but you can always email us, or participate in the discussion on Facebook!)

The best thing about dahl, besides the Extreme Inexpensiveness of the ingredients, is that it can accept So Many Leftovers. Leftover broth, leftover meat bits.. leftover Random Veggies..

Here is the basic recipe, alter at will!

Fry ginger, garlic, onion in butter. Add lentils, tomato, and water or broth. Cook in a pressure cooker for 7 mins, or on the stove until lentils are soft.

While lentils are cooking, gently fry cumin, fennel, mustard seed until you can smell the spices.

Once the lentils are cooked, add the spices, and remaining ingredients. Add fresh chopped cilantro. If you want a creamier dahl, add some coconut milk.

At Cast Iron Farm, we love to collect recipes for Things To Do With Odd Bits. Trotters are the foot and ankle part of a pig, and are is full of gelatin, collagen, and might possibly be the fountain of youth (or so this article claims).. and are also one of the things people ask us about most often when we have it listed on our sale board (what is a TROTTER?!?). There isn’t much meat on a trotter, but with a pressure-cooker or slow-cooker, all the delicious goodness gets transferred into the cooking liquid. Anyone with joint issues should definitely be eating more trotter broth!

This recipe comes highly recommended by one of our wonderful trotter-loving farm-supporters (thanks, Fiona!). Do you have a favourite recipe for trotters or hocks?

One of our favourite things to eat is pulled pork, made in our pressure cooker.  Here’s Erin’s highly variable recipe for Cast Iron Pulled Pork.

Take 1 large pork butt roast.  It doesn’t matter if it’s still frozen, or perhaps it does, but Erin has no idea because it’s always still frozen.

Put the roast in the pressure cooker with some variation on these ingredients:
– broth
– fried onions and/or garlic
– half a bottle of BBQ sauce
– molasses (not very much)
– garam masala, fried in a bit of coconut oil
– tomato sauce
– water to bring the level of liquid up to almost cover.

Pressure on high cook for half an hour.  Open the cooker and cut the pork up into chunks (maybe a couple of inches?) so it cooks faster.

Pressure cook for another half an hour.

Take pork out, skim the fat off the cooking sauce as much as possible.  Mix about half and half cooking sauce with barbeque sauce to make the pulled pork the right consistency.  Heat it all up together, and pull the pork apart into pieces in the warmed sauce.

Enjoy, either on rice, or on toasted buns, with cole slaw (or crunchy raw cabbage) on the side. 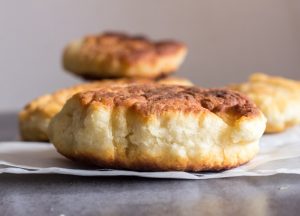 This is a favourite recipe in cold weather.  If you have less than 9 people (plus farm-helper guests) in your household, you may want to make a half batch.  This has been a great success with one of our farm people that is allergic to wheat.. she can eat things made from this dough after a few days of fermentation.

Mix the water and yeast in a big bowl, let it sit a bit so that the yeast dissolves.  Add salt and flours, mix.  Cover.  Place somewhere warm and ignore for at least 12 hours.  If you have a cold pantry where you can keep it, the dough stays usable for up to 5 days (after which it gets a bit too alcoholic), or you can keep it in the fridge.  For best results,  give the dough a bit of time to warm up if it’s kept really chilled.

Use resulting dough to make:

BREAD THINGIES: Take a scoop of dough, stuff it with whatever cooked ingredients please you. (Cheese and jam! Bacon and cheese!  Pork and leeks!  Chocolate and marshmallows!  Pulled pork!  The chunky bits from leftover stew!)
Fry in lots of fat (lard is best) until both sides are golden and it has risen a bit (at least 5 mins).

BREAD or BUNS: add enough flour to allow you to form it on a baking dish without being a sloppy mess, cook at 350-425 until done.  Very nice crust when you cook it in a pre-heated dutch oven, high heat, with the lid on.

PIZZA: Roll it out on a heavily floured surface, with lots of flour on top, so it doesn’t stick to your rolling pin.  Put pizza stuff on top.  Cook like pizza.

The possibilities are endless!!  Have you tried something like this before?  Tell us your secret recipe.. please?